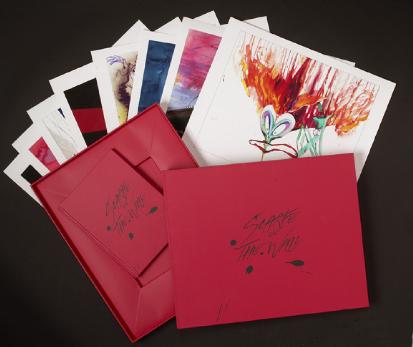 Scarfe on the Wall was created by Ben Arogundade for Gloria Books. The work of award-winning illustrator and cartoonist Gerald Scarfe has featured in newspapers, magazines and within the performing arts for over forty years. His collaboration with Pink Floyd produced the most enduring musical multi-media concept in rock history, culminating in the classic album, ‘The Wall’, plus the 1982 feature film by Sir Alan Parker. Scarfe designed the album artwork, tour animation sequences and models for the historic album.

Scarfe on the Wall was a celebration of this creative period. It consisted of an authorised boxed set of five individually signed prints from Gerald Scarfe’s images for ‘The Wall’, plus three previously unseen artworks. All images were individually selected by Scarfe and Roger Waters, and each was numbered and signed by the artist. It was produced in a limited edition of 300 units.
Please note: we do not stock copies of this collectable.